RALEIGH, N.C. (AP) -- The Carolina Hurricanes' chance to secure home-ice advantage in the first round of the playoffs seemed to have slipped away after two late-season losses.

Then they went out and claimed it anyway, thanks to a timely overtime goal from a low-scoring defenseman who closed his eyes and uncorked a one-timer that beat the winningest goalie in NHL history.

Now the challenge is to make it last. The Hurricanes, who split the first two games of the series in New Jersey, know the Devils would like nothing more than to take that edge right back Sunday night when the opening-round, best-of-seven matchup series shifts south for Game 3.

"You can win anywhere, but obviously in front of our home fans, we can use that advantage in the right way," Carolina left winger Tuomo Ruutu said Saturday.

"We've just got to enjoy it and get some extra energy out of it."

They certainly made it pay off the last time they made it to the postseason. This will be the Hurricanes' first playoff game before those rowdy Caniacs since they raised the Stanley Cup three years ago.

Carolina began its first trip back to the postseason with a sluggish 4-1 loss to the Devils, their third straight defeat counting the two setbacks in the final week of the regular season that dropped the Hurricanes to the No. 6 seed in the East.

They followed that with a 2-1 win that ended when Tim Gleason's blast beat a screened Martin Brodeur at 2:40 of overtime and evened the series at one game apiece.

"I'm sure they feel pretty good about themselves, like we felt pretty good about ourselves after Game 1," Brodeur said. "But we thought we played another solid game. So we played two good hockey games against a good hockey team. They played probably only one, if you asked them. We're on the road now, looking to go into a battle."

They'll have to do it shorthanded. Devils general manager Lou Lamoriello said captain Jamie Langenbrunner, New Jersey's top-line right winger, will miss both games of this trip due to a lower body injury sustained during the second period of Game 2.

New Jersey coach Brent Sutter said he hasn't decided yet how he would juggle the lines to replace Langenbrunner, who scored his 32nd career playoff goal in Game 1.

"It's what (do) you do with those guys that you take off that, when you take them away from that line? How does it impact (right winger Brian Gionta)?" Sutter said.

"Those are things that you've got to think about. What is the right fit for (forwards Travis Zajac and Zach Parise), too? There's a lot of different things to weigh out here."

Then again, the Devils are used to making up for their injured stars. They were without Brodeur for four months after he hurt his left elbow and still managed to win the Atlantic Division for the third time in four seasons.

"All year, we've bragged about our depth of our team, and how everything was solid," Brodeur said. "Everything will be tested now. Guys can do it."

A day after Gleason's winner, the defenseman and his shot remained the hot topic in the Hurricanes dressing room -- especially since he hadn't scored since March 8, 2008.

"I'm not known for my offensive capabilities, but I guess it was a good time to show my side of it," Gleason quipped.

Then, he admitted that he may have had a little help: Defenseman Niclas Wallin, whose three career postseason goals have all come in OT, blessed his stick before the game.

"There is a difference in a guy who's got 40 (goals) and he's putting the puck in the net because he's supposed to," Carolina coach Paul Maurice said. "Timmy had such a big impact on the game prior to that goal, that it was fitting that he would score.

"Those guys usually get the ice bags at the end of the game. They don't usually get a lot of high-fives. He's earned it." 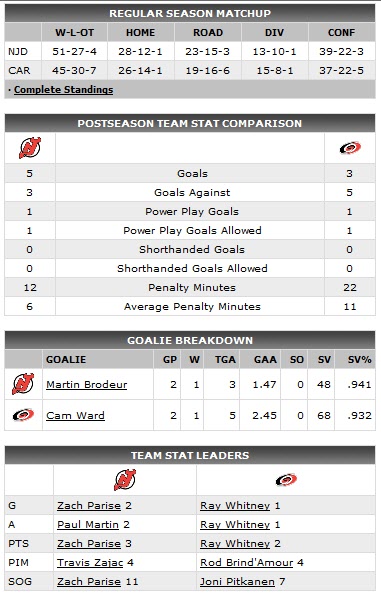 Number of posts : 4376
Age : 32
Location : New Brunswick
Favorite Team : Ottawa
Registration date : 2009-01-23
ha i didnt realize this was the game of the night or i would have been posting in here instead of the other thread

EDIT the penalty had just expired

Number of posts : 7179
Favorite Team : Detroit
Registration date : 2008-08-05
Some Ottawa content in this game: Eaves gets the primary assist on Larose's tying goal.

made me happy to see it too shabbs :D: