PENS VS CANES SCP EAST FINAL '09: WHO WINS? HOW MANY GAMES?

In the West we have two 'Original Six' teams with a history that is intertwined going back to their respective entries into the NHL back in 1926.

The Penguins and the Hurricanes represent "The New Generation" of the first two Expansion Eras of the 'modern' NHL, if we consider that generation as beginning a half century later.

The Penguins are part of the first group of six expansion teams back in 1967. The Hurricanes are the descendants of the World Hockey Association Hartford Whalers (formed in 1971), who were one of the WHA teams accepted into the NHL when the leagues merged in 1979.

Both franchises have featured a parade of stars--and more than a few legends, from Mario Lemieux and Sidney Crosby to Gordie Howe--yes, Gordie Howe--and Eric Staal.

Both franchises have weathered serious financial turmoil--and the Hurricanes were even moved from Hartford because of that turmoil.

Both have rabid fan bases, who love their teams with a passion that surprises many so-called 'traditionalists'.

Both teams have a rich history, full of fascinating details for hockey trivia buffs.

As usual, I'll be posting breakdowns of this match-up from different perspectives; and hope of course you'll all add your valued ideas, comments, thoughts and predictions.

In the meantime, Ladies & Gentlemen of GM Hockey, make your picks!

The Hurricanes aren't about to be daunted by anything when these Eastern Conference Finals begin, not by the Penguins, not one bit.

Not by Sidney Crosby, not by Evgeni Malkin. Why, many of these Hurricanes were winning a Stanley Cup when those Pittsburgh stars were still toddling along in NHL training skates.

This is not a Carolina team that feels lucky to be here, this is a team that thinks it can beat the Penguins and then go full bore for its second Cup in four years.

The Hurricanes are not that very sure of themselves simply because they're coming off of a Game 7 on enemy ice in which, for long chunks, they had their way.

The final score may have been Carolina 3, Boston 2, but until the third period, it wasn't really that close.

Not in the early going when Carolina came onto the ice like a fleet of locomotives.

Not in that fat chunk, middle of the second period, where the play was all Hurricanes, cycling and pressing and taking a 2-1 lead and behaving as if they owned the place.

They behaved that way at the start of overtime, too. Carolina hung on, didn't buckle after Boston, the best team in the Eastern Conference after all, tied it up in the third.

Then Scott Walker buried the rebound that won the series. "We knew that eventually we would get one," said Eric Staal later.

Now goaltender Cam Ward is 4-0 in career Game 7s. Now Ward is six playoff series into his NHL career and he still hasn't lost a single one. Think HE believes he can get past Pittsburgh?

But there's more stoking Carolina. How's this for a confidence-builder: The Hurricanes just faced off against the second-most dangerous power play in the East -- a Bruins' group that converted at a rate of 28 percent over the regular season -- and shut it down 25 of 27 times.

The Hurricanes also got a lift from one of the men they need the most: captain Rod Brind'Amour, banished lately to the fourth line, was there right at the top of the crease, perfectly placed, just by Tim Thomas' stick, to tip in the first Carolina goal. That was Brind'Amour's first this postseason, and no, that's not a misprint. If the revered old center, sidelined for much of the overtime in Game 7, can add any offense, anything at all really, well, that will be something to feed off.

This is a team that knows just what it is getting against the Penguins and doesn't mind it. Here's what Ward has to show for his last two games against Pittsburgh this season: two wins, and 65 saves on 68 shots. He stopped Malkin on a penalty shot last month, turned away Crosby on breakaway.

Over the last four seasons Carolina has beaten Pittsburgh 10 times in 16 games.

The Hurricanes don't mind being the underdogs here, aren't bothered by not having home-ice advantage. That's the way they've been playing all spring long.

The Eastern Conference finals? A battle against the formidable Penguins? Said Staal: "It's going to be fun."

I'll have to mull this one over...

Carolina is the most resilient team I have seen in a long time, they are a really solid group that can get the job done.

Cam Ward has been absolutely ridiculous, very difficult to beat.

I can't believe they knocked-out Jersey and now Boston. I'm still in shock.

I might have to go ahead and pick them to take this series...they kind of remind me of the Sens the year we went to the Final. We were the underdogs and knocked out the higher seeded teams.

So, that being said, I will go against the grain and choose Carolina in 7.

I think Ward will outplay Fleury in this one. The only question is if Carolina can score enough to stay in it. I think they can.

davetherave wrote:IMHO this one's a tossup. Could easily go seven...with lots of OVERTIME!!!!


agreed, Canes in 7, don't want whiny Sid to go back to the finals again anyway, this series is going to be overshadowed by the original 6 western final anyway.

Eric and Jordan Staal are about to go where only the Espositos, the Plagers and the McCrearys have gone before.

When the puck drops Monday night on TSN for the opening game of the Carolina Hurricanes/Pittsburgh Penguins series, it will mark only the fifth time in NHL history that siblings have skated against each other in the Conference finals.

The last time a brother act such as this occurred was in 1974 - when Phil Esposito's Bruins faced Tony's Blackhawks. The rarity of the occurrence was not lost on the Staals.

"This is the best time of the year to play hockey," said Eric in a conference call held by the NHL on Friday. "When brothers are playing against each other in the Conference finals it's exciting not only for yourselves but for the rest of your family for sure."

There will be a lot of bragging rights on the line for the brothers, who have already accomplished a great deal in their young NHL careers. Hurricane Eric (the oldest of the four Staal spawn) already has a Stanley Cup ring to his name, along with four All-Star Game appearances.

Jordan, meanwhile, was a Calder trophy finalist in 2007 and, in 2008, helped lead the Penguins to their first Stanley Cup final appearance since 1992. Both players are predicting big things in the upcoming matchup.

"I'm due for a really big game," joked Eric.

"So am I," agreed Jordan. "I'm going to break out in this series like crazy."

After a solid regular season that saw him reach the 40-goal plateau for the second time in his career, Eric has raised his level of play in the playoffs, leading the ‘Canes in goals (nine) and points (13) and likely cementing his spot on Canada's Olympic team for the 2010 Games.

While Jordan has yet to repeat his offensive explosion as a rookie - where he scored 29 goals and set a rookie record with seven short-handed markers - he did enjoy a solid regular season, finding the back of the net 22 times and adding 27 assists while skating in all 82 games. In 13 playoff games, he has added a pair of goals and three assists.

Known as one of the better two-way centres in the league, Jordan could well be asked to shadow his older brother in the upcoming Eastern Conference finals, a challenge that both siblings say they welcome.

"He's obviously played well against the other teams' top lines in the last two series or they (Pittsburgh) wouldn't be where they are right now," stated Eric, sounding like a proud older brother.

"For me it's about focusing and playing my game no matter who I'm matched up against on the other side. It will be the same if it is against Jordie."

On Thursday, Jordan ratcheted up the rivalry by alluding to the game of one-upmanship put on by Sidney Crosby and Alex Ovechkin in Game 2 of their series that saw the superstars traded hat tricks.

"With me playing there's always a good chance for hat tricks," laughed the younger Staal. "I don't know about Eric."

The rivalry also extended off the ice where the elder Eric conceded victory to the younger Jordan in one key area.

"His playoff beard is better than mine, mine is pretty bad," Eric admitted. "But he was a grown man at age 12 and I didn't hit puberty until age 20."

Despite skating against each other for the past three seasons, this will be the first playoff encounter between the two brothers, but Jordan likely got a good preview of what to expect by facing sibling Marc in the second round last season when the Penguins eliminated Marc's New York Rangers in five games.

Marc wouldn't reveal on which side his loyalties lie for the upcoming series.

"I don't know who he's going to be cheering for," Jordan admitted. "He texted me last night and said that it was going to be a tough series to watch. It's going to be interesting to see which side the family rolls on."

With brother Marc manning the blueline in Manhattan and youngest brother Jared taken second-round pick of the Phoenix Coyotes last summer, this could likely be the first of many times that parents Henry and Linda Staal will be forced to watch their boys go head-to-head.

"To be honest I feel bad, but it's so hard on our parents when they are at the games," Eric said. "They don't know who to cheer for."

"I think their plan is to stay home and watch it on TV."

Regardless of who prevails, it will be the third time in four years that a Staal brother will compete for the Cup.

"Once the series starts, you are in that zone, you're in your game and once it's over, it's over," said Eric. "We're still brothers, we're still family. One is going to be disappointed and one's going to be excited. In the end that's the way it had to be and this is the challenge that we've got in front of us and we're excited about it." 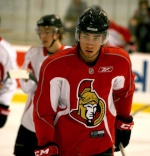 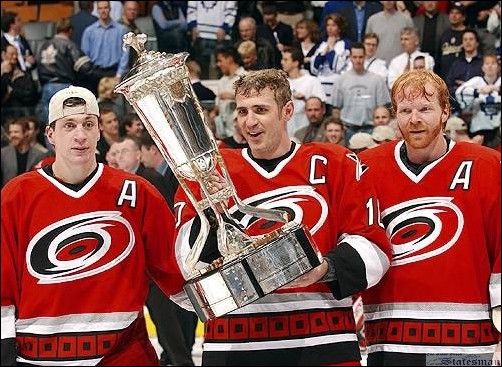 Penguins Coach Dan Bylsma played right wing for the Anaheim Mighty Ducks in the 2001-02 season, his second of what would be four with the club.

PS in terms of Ottawa content, Jason York of Team 1200 Sports Radio's "Healthy Scratches" played defense; and Bryan Murray was the coach. The Mighty Ducks finished that year, last in the Pacific Division with a 29-42-8 (and 3 OTLs) record for 69 points, and missed the playoffs.

» Ottawa Senators (present and past) TIDBITS & QUICK HITS!
by Lagoon Today at 6:22 pm