I love living in Kanata

Number of posts : 50711
Age : 58
Location : Kanata
Favorite Team : Ottawa
Registration date : 2008-08-05
I was dropping off my kid for his last day at a Hockey Camp at the SensPlex. There was a beer-league type game going on so I stopped for a few minutes to take a look. A pretty typical game. Just three subs for each side, some guys with a little skill, some with, well, too little. Then I see a guy who's dangling and dipsy-doodling all around everyone else, and it doesn't even look like he's trying. You can tell that he's on another level from the others. Then it strikes, me, that's Shean Donovan! Playing at 7:30 on a Friday morning in a pickup league. Is that cool or what?

I was talking to one of the camp counselors and he said there was another NHLer in the game, someone from the Panthers. Who from the Panthers is from Kanata?
_________________
Hey, I don't have all the answers. In life, to be honest, I've failed as much as I have succeeded. But I love my wife. I love my life. And I wish you my kind of success.
- Dicky Fox

Number of posts : 7429
Age : 40
Location : Ottawa
Favorite Team : Ottawa
Registration date : 2008-08-11
Cory Murphy? Not with the Panthers anymore, I know -- I think he signed with the Devils last month -- but he's a Kanata boy who just finished playing for FLA. 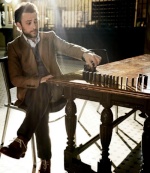 Number of posts : 982
Age : 34
Favorite Team : Ottawa
Registration date : 2009-03-30
I was thinking Murphy originally, but he was traded to tampa mid-season so I wasn't sure but the more I think about it, the more it sounds like Murphy

My older brother played baseball with Cory Murphy's older brother, so I would hang out with him from time to time. Had no idea he would ever end up in the NHL.

Also played some pick-up hockey with some OHL and AHLers over he yearsin Kanata. Man, do they ever put you in your place, performance wise. You think you're skating well and everything until you share the ice with these guys, and they're not even going at full tilt either!

Whenever I had time, I'd pop over with the kids and just watch; usually you could find out the schedule fairly easily - not so much now, as it seems to be more variable (or I'm just stupider).

Re: I love living in Kanata

» General Hockey Talk - Injuries, signings, factoids + other news from around the league
by tim1_2 Yesterday at 7:40 am