Another incident raises questions about KHL medical protocols on Tue Sep 22, 2009 6:57 am

Paul Kariya's younger brother, Martin, was hit from behind and knocked unconscious. While the teams' medical personnel were on the ice in seconds, the ambulance drivers were enjoying the game and had to be paged over the PA. They weren't exactly johhny-on-the-spot. Oh, and they did not have a spinal board -- Kariya was carted off in what amounted to a hammock with straps. 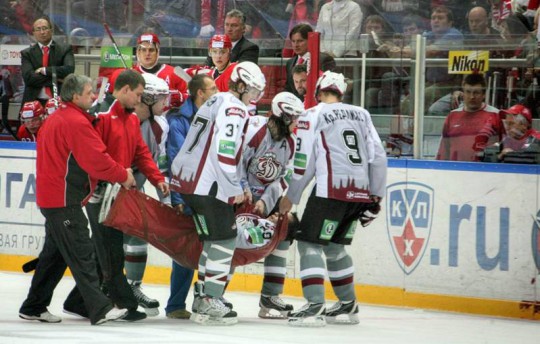 Spartak coach Milosh Rziga was quoted as saying. “Both our doctors and
their doctors were on the ice as well as emergency medical personnel
who weren’t summoned at first. What, are they supposed to jump across
the boards? They could only get on the ice where the Zamboni comes on.
I think that in this situation, everything was fine.”

Umm, not, the ambulance should, if possible, be parked right next to the Zamboni or right outside the arena, next to the closest exist accessible from ice-level, and the drivers should be at the ambulance or at ice level, near that exit. They should not be sitting in the stands.
_________________
Hey, I don't have all the answers. In life, to be honest, I've failed as much as I have succeeded. But I love my wife. I love my life. And I wish you my kind of success.
- Dicky Fox

Re: Another incident raises questions about KHL medical protocols on Tue Sep 22, 2009 6:59 am

Number of posts : 51147
Age : 58
Location : Kanata
Favorite Team : Ottawa
Registration date : 2008-08-05
In the Cherepanov incident the ambulance drivers left the game a little early and had to be called back. Maybe giving them tickets/seats was to entice them to stay until the end?

» General Hockey Talk - Injuries, signings, factoids + other news from around the league
by tim1_2 Yesterday at 11:46 pm