The Sens will try to go 4-0 on the road to start the season as they visit another 0-3 Metropolitan Division team. Ottawa got back in the 'W' column as seven different players scored last night in Columbus. Captain Erik Karlsson led the way with four points (all assists) as Zibanejad and Ryan had a goal and two assists, each (Ryan's into an empty net). The top line was at it again with a couple goals, including a real pretty assist from Stone to Turris; if you missed the game I'm sure you've seen it on the highlights reel. Other scorers included Methot, Pageau (goals in consecutive games) and Hoffman with a rocket.

Anderson had a bit of a shaky start but the offense pulled him through; I'm sure he'll be returning the favor many times over as the season rolls along.

Clarke MacArthur got tripped up near the boards, fell forward, and got up slowly, holding his hand up to his helmet. He came out of the game with an "upper body injury" so this may be the start of a long season for him. If you get shaken up just falling forward like that, I wonder if he is fully healed from the concussion last year.

Guess we finally see Prince draw in. And probably Hammond, as well.

Number of posts : 18086
Age : 37
Location : Ottawa
Favorite Team : Ottawa
Registration date : 2011-01-07
It'll be interesting to see the Hamburglar in action, assuming he gets the start. I'd be lying if I said I wasn't a little concerned.

tim1_2 wrote:It'll be interesting to see the Hamburglar in action, assuming he gets the start.  I'd be lying if I said I wasn't a little concerned. 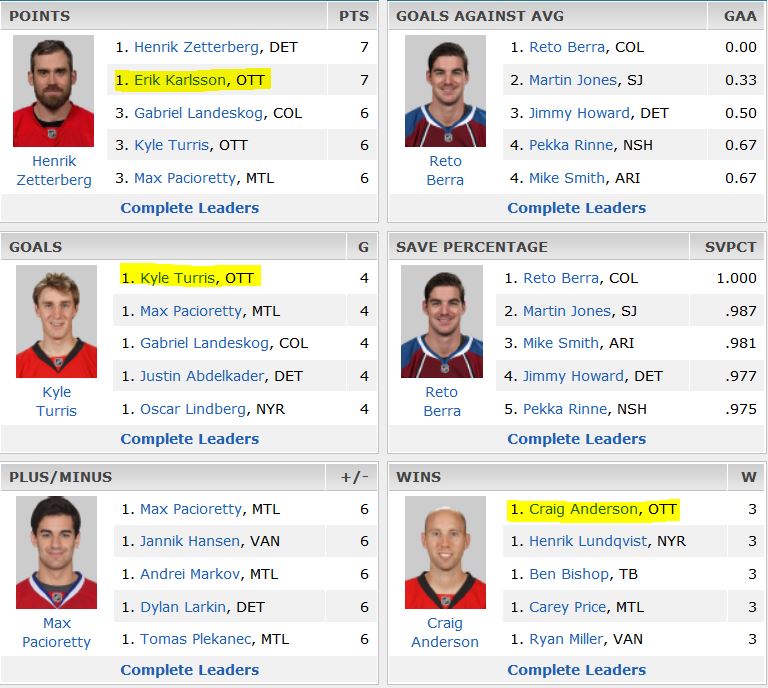 That said, Karlsson can totally finish top 5 in points this year.

wprager wrote:Stone had 7 takeaways before yesterday's game.  The one on Turris' goal was a takeaway IMO and he had at least 3 others of the more usual stick-interception variety.  Yet today he's (still leading the league) with 8.

He and Karlsson sure do their best to allow the team to play with the puck as much as possible. The way they both read the play is so incredible valuable.

Ev wrote:I bet on Karlsson to win the Hart before the year.

This isn't even something that should be considered a long shot. Assuming the team in general keeps improving, his numbers should only go up. The guy is a flat-out freak, and I'd say he's a top 3 player on the planet.

tim1_2 wrote:You know how foolish it is to post stuff like that one week into the season?

That said, Karlsson can totally finish top 5 in points this year.

» General Hockey Talk - Injuries, signings, factoids + other news from around the league
by tim1_2 Today at 10:16 am

» Ottawa Senators (present and past) TIDBITS & QUICK HITS!
by PTFlea Yesterday at 9:44 pm